Well, I’m fast approaching 32 weeks preggers and am quite sure I should be just sitting around. No? Of course, I’m not – we haven’t had a day or evening off for weeks despite taking time off work! We did at least make it to a Halloween party – the glamorous witch and his pregnant cat!

As you can tell, our impending parent status isn’t making us take life any more seriously! But the very grown-up job list is gradually getting a bit smaller and we are at least finally making progress including buying and selling a car and applying for a remortgage. And we’ve just had these exciting deliveries for our baby girl:

Cool huh? The highchair – which you can use from birth – looks fab in our dining room!

So, what of the nursery then? Well, being the tease I am it’s not quite finished so I can’t yet share pics. So, instead I thought I would share some choices.

First up, as revealed in a previous post, our choice of colour is Cornforth White, a lovely soft grey which we’ve paired with white woodwork and the same carpet we have in the spare room and master bedroom; Cormar Sensations in Coral White.

After much deliberating and budget breakdowns we opted for furniture from Mamas and Papas and we’re really pleased with the build quality. It’s officially ivory but it’s not a yellowy cream but instead is a pleasant off-white:

And also in this space we have the most wonderfully comfy nursing chair – a bargain from a Kiddicare store that was closing down. Not the most attractive piece in our house but it’s damn comfy!

So, they’re the basics; now onto the more fun stuff! In the early days of pregnancy we lovingly referred to our baby as Panda  – read more here – so we wanted a reminder of this. We have the most thoughtful, lovely friend who offered to make our nursery curtains as a present. She’s truly one of life’s finest – always doing stuff for others and never asking for anything in return. Thanks to her kindness we could choose our fabric and so we opted for this:

Fab, isn’t it? It’s a Japanese print so when you look from a distance it just looks like a pattern (for a sense of scale, the panda is only about 1.5cm) it’s only when you get up close you see it’s little pandas doing star jumps! It’s from a website called Fabric Rehab who have some amazing fabrics and – as I found out – really great customer service, I would highly recommend them. We hung the curtains last week and are soooooo pleased with them – not just for the fabric but also for the love and kindness that went into every stitch.

Up next – our other favourite thing. This incredible wall sticker from Nubie:

It came in 40 odd separate pieces and took us a few hours to master on our wall but we LOVE it! It goes over the cot and really makes the room for us.

To tie in with the wall stickers, this is our cot mobile by Skip Hop: 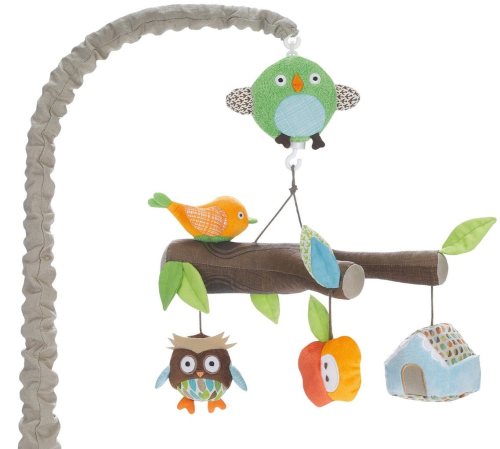 We have some teal coloured gloss floating shelves from Ikea which house a collection of soft toys – including my own “beasts” from when I was little who have lived in every house I have – yes, including all my uni digs, they never left my side.

There’s a bear (Snow White Belinda), a hedgehog (Hedge), a frog (Uncle Froggie) and a lime green snake (Hiss). Given their age, none of them will be for playing with so they’re on a high shelf just keeping an eye. My bear – BooBoo – is also watching over the cot, happily perched on top of the wardrobe. The other critters currently include a badger, a lizard and a squirrel – along with my mum’s Hedwig owl. We’re hoping a fox and a raccoon will join the crew….they’re on our Amazon wishlist just waiting for a kindly donor to buy them (we’re out of cash!).  You’ll have to wait to meet all the critters in the reveal post.

So, when you have a sort of technicolor sort of woodland theme going on – what kind of light do you need? A dandelion clock of course! I’ve seen this Ikea light in quite a few Pinterest nurseries and, thanks to our high ceiling, we totally get away with it:

It’s a whopping 80cm diameter so makes quite an impression. We have it on a dimmer and it can cast the prettiest of patterns on the wall and ceiling.

Our other artwork is quite minimal – as too much would crowd the room. We have this amazing Shakespeare quote via Etsy as well as a beautiful hand painted banner from a talented friend of mine, also via Etsy

And, alongside this, we stumbled across this fab world map – as illustrated by animals. This is going above the changing dresser and may even help with my dismal geography!

We also have a limited edition Little Miss Trouble print (you’ll get to see this on the future reveal post too!) which was given to us several months ago by one of our nearest and dearest friends. She had read the blog and knew we were going for bright colours so bought us presents accordingly including the print from a little art gallery in London. We’re so lucky with our friends, and so thankful for them.

So, apart from various knick knacks we already had – that’s about it and we’re officially pretty much out of space for anything else! We have practical unpacking to do in there and a good tidy-up and clean and then I promise to share pics of the final result.

In the meantime, what do you think? We haven’t tried to be super stylish, we’ve stuck to things we love but we’re really pleased with how it’s all turned out. And so long as our beloved Tiny T loves it, that’s all that matters.

For now, we keep opening the door with happy goofy smiles on our faces and closing it again before Humph claims it as his own. He’s already staking a claim in other rooms…..