Mexico, househunting and a little shower….

Yes, I know, I promised that when we got back I’d be sharing actual pictures of the house and what we’ve achieved. What can I say, I’m a terrible tease!! But, honestly, since we landed a couple of weeks ago we’ve been really busy and also slightly distracted by house-buying; more on that later. 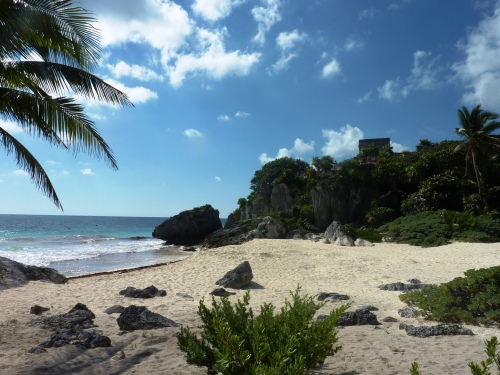 Mexico,thanks for asking, was absolutely everything we needed it to be. Whilst the poor UK was drowning (literally, in horrendous flooding) we were luxuriating in the glorious Riviera Maya.

Critter spotting – our resort was set in an ‘eco jungle’ so was alive with critters which we absolutely loved. Every day there was something new to spot or say “hello” to (or “goodnight” as it happened…..every evening on the walk back to our room I insisted on roll calling all the critters we’d seen that day and saying “night” to them. I’d blame the cocktails but the truth is, I’d have done it sober too.)

Not a single mosquito bite – yep, that’s definitely a highlight. I am normally absolutely bitten to shreds despite the strongest tropical repellent. Not this time! Thanks, we think, to the eco balance of the resort and the aforementioned abundance of critters (iguanas and spiders galore) who were no doubt guzzling up the evil mozzies.

Snorkelling with turtles – next to our resort was a small fishing village called Akumal, meaning ‘place of the turtle’ in Mayan because they feed on the sea grass here. We just hired (mandatory) life vests and waded into the water from the beach; within minutes we saw a huge turtle. In just an hour in the water we were joined by 5 turtles and a couple of absolutely huge stingrays. Loved it. Oly did not love the resulting sunburn as much…but guess who advised him to wear a tshirt under his life jacket? This is what happens when I’m not listened to.

Not getting stung by a lionfish – there was great snorkelling right off our resort beach too. One day we spent ages getting incredibly close to a ‘really pretty fish’. I loved watching it, spent ages right by it, getting closer and closer until Oly got bored. We google imaged it later to find out it’s kind of venemous and you shouldn’t really hang around  with it. Ooops.

See how pretty he is? An easy mistake, no?!

Coba – we’ve done Chichen Itza before and so this time went to the Mayan city of Coba, which was incredible. In a couple of weeks you’ll be no longer able to climb the ruins of the grand pyramid so we’re lucky we made it in time. I say lucky….to be honest, I can see why they’re closing it, it’s pretty unsafe now. I hadn’t realised how absolutely incredibly petrified I am of falling until I had to get back down (my fear stems back to a nasty fall down a fire escape as a 5year old). So, yes, I was the ladylike tourist who bumped my way back down to safety on my ass…… 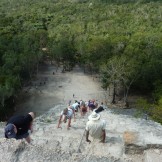 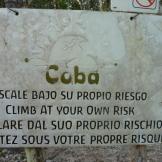 Tulum – not far at all from our resort so we just hopped on a bus and enjoyed the incredible views. Seriously, postcard perfection. And back at the resort in time for lunch and a siesta in the sun, what’s not to like?!

CocoBongo – that’s a nightclub/show type thing. Check it out. I have never ever seen anything quite so amazing or crazy and we absolutely loved every minute of it. We considered going back a few nights later it was that good. Darling Husband losing our room key at 5am didn’t even dampen it – nor did the stonking hangovers.

Hiring a jeep in Cozumel – a quick ferry ride and we had a day with our own (knackered!) jeep exploring the island. We beat all the cruise tour parties and just did our own thing. There was an embarrassing incident outside Starbucks (yes, we feel the shame, but I so wanted a frappuccino) when Oly couldn’t get the handbrake off. But a friendly local soon came to our rescue.

Doing nothing – damn, that was good. We did get out and about quite a bit but the rest of the time we just mooched, ate, lay in the sun, drank, played in the waves, listened to audio books (best thing when sun bathing!) and generally relaxed. We even squeezed in a trip to the spa and sat in the jacuzzi watching the sun go down discussing the year that was and how much we’d achieved. 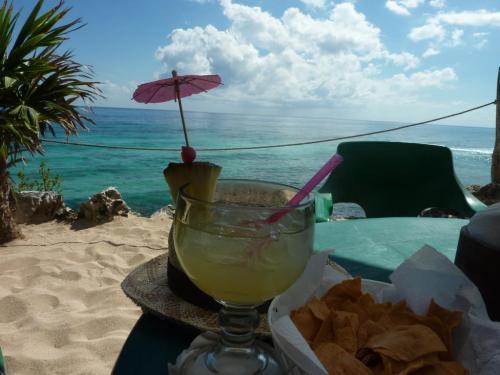 Lizards – a little known fact is that I have a total fascination for lizards (much to Oly’s mum’s disgust – she’s not so keen!). Mexico is a total haven for iguanas and geckos and our resort in particular had tons of them – still very wild so not keen to get too close to humans. I tried, believe me. So, meeting this fella in Cozumel made me especially happy.

So, pretty much – that was Mexico.

We came home to very exciting house buying news. No, we’re not selling ours before you all start putting offers in; not sure we’ll ever sell this house now.

The exciting news was about Oly’s brother who has recently been trying to buy  his first house where he currently lives in Birmingham. His job is now changing which means he is going to be covering the North of the UK now, so he took the only sensible decision – to move to Leeds. Yay!!

Almost as soon as he told us we were on Right Move checking out what he could get. We were privileged that he wanted us to help him with the hunt and we’ve really enjoyed it. A couple of weeks and a  few viewings later (such fun!!) and he’s had an offer accepted on an amazing terrace about 2 minutes walk  from us!

Oly is absolutely over the moon at the thought of it and I’m pretty damn chuffed too; he’s such a lovely guy we’re looking forward to seeing much more of him. But it does help explain my lack of  recent blog progress.

Once again, I promise to get taking photos and showing you what we’ve actually done with the rest of the house. So, stay tuned. Yeah, yeah, I know – you’ve heard that before……….

Oh, I almost forgot about Him. He had a lovely holiday in a luxury cattery whilst we were away, you’d think he would’ve been grateful……….

Oly went to pick him up and on the drive home (about 20mins) suspected he may have had a little accident in the car (Humph, not Ol).

On putting his cage down in the hallway and lifting off the lid Oly said, “I think he may have weed himself”, just as Humph dramatically leapt from his cage and little poos went flying about 10 feet all over our lovely new 100% wool carpet. Quite literally a shit shower. Or a dirty protest.

Thankfully we own a carpet cleaner but it wasn’t quite what I wanted to be doing after a night flight. So he is currently referred to as The Little Shitbag who is capable of concealing a dozen poos in his little fluffy trousers until it is time to unleash them. He’s still damn cute though.

12 responses to “Mexico, househunting and a little shower….”